The Legend of Frederick Wilson 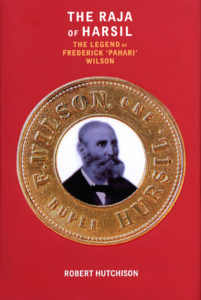 The Raja of Harsil tells the story of Fredrick Wilson, a 19th-century adventurer who, in the words of Rudyard Kipling, “lived a life that would have been the envy of kings”. He was the first European to permanently settle in the Bhagirathi valley. Virtually penniless when he got there, possessing little more than two rifles, a bedroll and the clothes on his back, fortune smiled on Wilson, making him one of the legendary figures of the British Raj.

From Wakefield in Yorkshire, he was a cocky 17 when he landed at Calcutta in 1836. Alone and feeling blue, India was the only country he really ever knew. He would fight for her, spied for her and lived his life for her. His earliest years were spent as an ensign in the Thirty-Fifth Regiment of Bengal Native Infantry, stationed at Meerut, a busy garrison town 40 miles north of Delhi – not brilliant years by any means, in fact rather unhappy ones.

A gifted marksman, during the first Afghan War ‘Black Dog’ Wilson, as his mates-at-arms called him, deserted under murky circumstances. He was suspected of killing a fellow officer in a duel. He arrived in the hill station of Mussoorie during the last days of 1841, a man on the run, claiming to be a backcountry trader. When suspicion caught up with him, he left Mussoorie in a hurry. His plan was to follow the Ganges towards its source, seeking a place to hide so remote and difficult of access that no British official would ever find him.

He settled at Harsil, one of the last permanently inhabited villages on the Bhagirathi, as the Ganges is known in its upper reaches. There he married and raised a family. At some point, because of clandestine services rendered to Crown and Company – services that others were incapable of or unwilling to provide – he was pardoned, never officially but complicitly, remaining for the rest of his life under a rakish cloud. He was 66 when he died in 1883.

Freed from the burden of being a fugitive and despite his dodgy image, Wilson made a fine reputation as the most successful trophy hunter of his day and a timber merchant who minted his own coin. At Harsil he built a deodar palace that was the epitome of modernity and luxury.

Having obtained from the Raja of Tehri a concession to rob the raja’s mountain kingdom of its forest cover, floating the logs downstream to Haridwar, where he built a sawmill, he became wealthy beyond anyone’s wildest dreams. He made his fortune selling crossties to British engineers then busily extending India’s rail network from coast to coast. Eventually he returned to Mussoorie, where he became the hill station’s largest property owner and moneylender. As time progressed he saw the damage his logging did to the fragile Himalayan ecosystems and became an early conservationist.

The Raja of Harsil chronicles Wilson’s extraordinary existence along the northern frontier. It describes his plundering of the Bhagirathi valley for its prized Himalayan cedars, the slaughtering of wildlife for plumes and pelts, and his introduction to the region of the apple seed, potato and green bean. He left a legacy of denuded forests and erosion, but also of income-producing apple orchards. The hill people called him ‘Hulseyn Sahib’ but to the British he was ‘Pahari’ Wilson, pahari meaning hill man in Garhwali.

Initially villagers regarded him with respect and admiration, but slowly their attitudes changed. Admittedly, he brought prosperity to Upper Tangnore, as the remotest stretch of the Bhagirathi valley was then known, but he was not loved for that. He introduced a cash economy where previously only barter existed; he diversified food sources, making the hill people less exposed to hunger and malnutrition, but he was not thanked for that, either. He kept their larders full with meat, the excess of his hunting, and introduced new tools and skills that measurably improved their living standards. In spite of these achievements, the priests of Mukhba and Gangotri remained sceptical, not to say hostile.