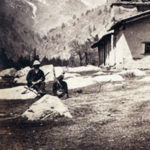 A fascinating tale… A highly romanticised version of the Wilson saga but an entertaining one… Wilson’s story is well worth recounting. According to local lore, he had angered the deity Lord Someshwar by desecrating the forests and laid a curse on him that his bloodline would die out after a single generation and no one would talk anymore of Pahari Wilson. Intriguingly, his three sons died young and so would Wilson’s story if Robert Hutchison hadn’t resurrected him. Dilip Bobb, India Today, 16 August 2010.

A good addition to a recent spate of books by a new brand of white sahibs about the original white sahibs who went native in 19th century India. Frederick ‘Pahari’ Wilson was certainly an interesting man. A British Army deserter and Great Game spy, Wilson brought lumbering to the Garhwal and set himself up as a local potentate of sorts in Harsil, still an idyllic town near Gangotri… Well researched and engagingly narrated this work of historical fiction makes for a good read, despite the odd Orientalist touch. The Times of India, 28 August 2010.

Robert Hutchison’s The Raja of Harsil is the riveting account of a complex man. Pahari Wilson, “so well known in these hills,” played a role in the Great Game and witnessed both the Anglo-Sikh War and the Mutiny of 1857. Hutchison’s retelling brings back a lost world. Nilanjana Roy, Business Standard, 14 December 2010.

…With rare pictures and illustrations of the Wilson family tree [the book] is in the form of romanticised fiction and a result of substantial amount of time spent by the author in the foothills of the Himalayas, trying to piece together the life of Frederick “Pahari” Wilson, who was first introduced to him by environmentalist Sunder Lal Bahuguna. Immaculately researched, the book is a sincere effort to understand the sort of man Wilson was, depicting love and affection for that character. The book tells the story of Wilson, a 19th-century adventurer who, in the words of Rudyard Kipling, “lived a life that would have been the envy of kings”… The book succeeds in its endeavour to immortalise Frederick Wilson and reaches out to readers of all generations.  Ajay Ramola, The Garhwal Post, 28 July 2010.

…A fascinating tale of love, power and adventure spanning four decades when India was a hotbed of controversy, intrigue and rising nationalism …a time  when ‘Pahari” Wilson became known as the man who led a life that would have been the envy of kings!  From Hutchison, we come to know that Wilson had two wives, both from Harsil’s neighbouring village of Mukhba. The prettier one was Raimatta, who proved unable to bear children. The other one was Sungrami whose nickname was Gulabi. She bore Wilson three sons –Nathaniel, Charles and Henry. The people of Harsil and Mukhba still tell tales about them, using their local names of Nathhu, Charli Sahib and Indri. Jhaskiran Chopra,  The Pioneer, 3 June 2015.